Delphi - one of the most important religious centres of ancient Greece. The Delphi Archaeological Reserve is a UNESCO World Heritage Site. The Archaeological complex and its museum are located 9.5 km away from the coast of the Gulf of Corinth at the foot of the famous Mount Parnassus in the Sacred Valley at an altitude of 700 m above sea level. In ancient times Delphi was considered the centre of the world. Excavations (since 1892) include: Temple of Apollo (VI - IV century BC), the treasury of the Siphnians (about 525 BC) and of the Athenians (early V century BC), a Stoa (portico gallery), the theatre (II century BC), the stadium (VI century BC) and other facilities. The terrace on the southern slope of the mountain, reaching 2,457 m, consists of ledges leading to the sanctuary of Delphi. The Delphic temple, situated in a natural stone amphitheatre, was considered the most sacred place on earth for centuries. From the famous temple of Apollo of the 4th century BC endured only the base and several columns, one with a capital. The staircase of the Roman period leads up to the theatre, small and typical Roman architecture, and further up to the stadium, which accommodated 6,500 spectators. The stadium shows well the start and finish line, marking a distance of 178 meters, or 600 Roman feet. In summer, during the Delphic cultural festivals, there are concerts and theatrical performances.

The Archaeological Museum of Delphi holds more than 6,000 exhibits, including masterpieces, famous throughout the world. Of great artistic and historic value are fragments of two statues of Apollo and Artemis made of ivory and gold, build during the Archaic period. In the same room a silver archaic bull is situated, once adorned the altar or the throne. The most famous of all the exhibits however is a bronze statue of the Charioteer of Delphi, perfectly preserved, constructed in 474 BC, probably built by the very Pythagoras of Samos and is one of the most advanced ancient Greek statues of the 5th century BC. 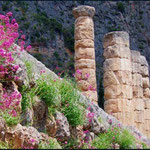 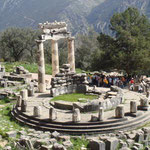 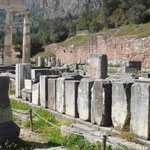 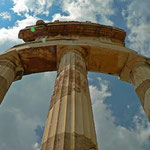 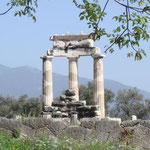 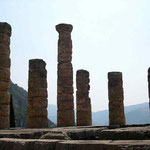 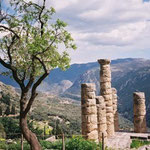 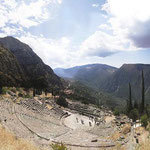